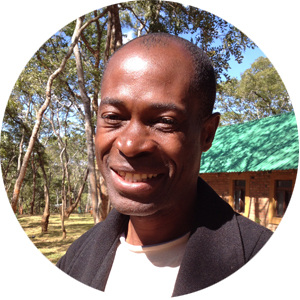 Augustine lives in Nchelenge in the north of the Luapula province of Zambia. He is married to Patricia and together they have 5 children, 3 girls and 2 boys.

We first met Augustine in 2009 when Cornelius invited him to a “Living the Light” village training event we were holding in Nchelenge. Today, Augustine spends two weeks every month as an Impact Team member. He helps to plant new Life! Groups and supports exiting groups. He is also involved in the Life! Skills farming training that is currently taking place and is sharing what he is learning about conservation farming with groups in his area.

Augustine is excited to see the progress being made by Life! Groups in his area, currently on a small scale, as result of the new Life! Skills farming training. This is being delivered in partnership with Foundations Zambia.

Augustine sees what he does with Dignity as part of his work pastoring people in his area. He says that what he does with Dignity is “taking the gospel to the lost ones” which sits within his calling to pastor people around him. He has used many of our training materials, including Love Your Village and Rooted in Jesus within his own church as well as in the Life! Group format we use.

One of the biggest challenges for Augustine is simply getting around as transport is very difficult. We have provided him with a bicycle that he can use which really helps, but non the less, it is still a massive challenge. The encouragement of seeing a lot of lives changing through the work of Dignity outweighs the challenges and keeps Augustine going. He knows that people really appreciate the teaching that Dignity is bringing and he is seeing it bring about practical change in their lives and those of their families.

As well as his work with Dignity, Augustine is a pastor of a church of 100 people. He enjoys reading and watching football although he’s recently given up supporting a particular team as he found it too stressful. He also correctly predicted the winner of the 2014 World Cup in the interview below!

You can hear Augustine speaking about his involvement with Dignity in this interview recorded in July 2014.