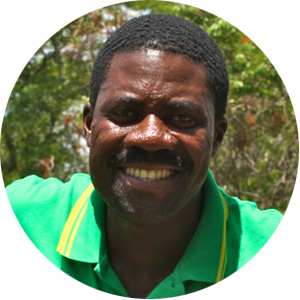 Bernard used to be a pastor in Zambia’s capital Lusaka and worked for one of the large Pentecostal denominations, troubleshooting and planting churches all over the country but he felt that God was calling him to serve the rural areas of his country. This calling is deeply rooted in Bernard’s past.

As a teenager growing up in Lusaka Bernard kept getting himself into trouble. To give him a fresh start his family sent him live with his uncle in a rural village. Life in the village was hard and very different to living in the city. While living in the village Bernard heard a pastor teaching about Jesus. This pastor had left a city job to work in Bernard’s village and over time led Bernard to believe in Jesus.

This experience stayed with Bernard and when he himself became a trained pastor working in Lusaka he felt God calling him back to rural villages to teach others. Thanks to his own experiences Bernard is totally committed to reaching out to those in rural areas who may not hear the good news of Jesus unless pastors are willing to give up the relative comfort of city life.

We first met Bernard in 2009 at a place called Chibombo where we were running a “Living the Light” village training course. His friends Margaret and Gervas had invited him along as they knew his heart and calling to serve rural communities.

Bernard instantly understood our way of working and got stuck in straight away, helping to translate teaching sessions and encouraging others. Shortly after that, Bernard became on of our first Impact Team members and was instrumental in shaping how that roll worked. Bernard still gives his time to be an Impact Team member and now also helps coordinate the work of Impact Team members in his area and across Zambia.

Bernard has faced many struggles in the past few years. His home was destroyed by a storm, his family has been stretched to it’s limits and some of the other enterprises he is involved with have been undermined by those jealous of his seeming success. That said, he is the first to say that through all of this he is seeing God’s faithfulness as each aspect of his life is being rebuilt and made stronger as he continues to serve Jesus.

Although Bernard had the heart to serve his country men and women, he says he didn’t have skills he needed. Working alongside Dignity has taught him those skills. wWe continue to support Bernard and all the Impact Team members with training, pastoral care, travel costs and friendship. Bernard says that the journey he is walking is causing him to grow in faith.

Bernard explains Dignity in his own words

You can hear Bernard singing a traditional Bemba worship song in the audio clip below. The main refrain of the song means “The Lord is Worthy”.