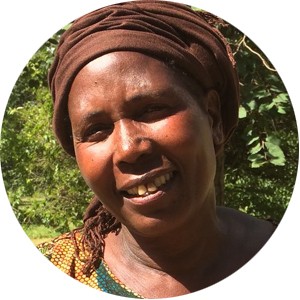 Dorothy is in many ways a typical Zambia matriarch. She lives in the far north west of Zambia with her husband and their extended family. Currently there are 16 people living at Dorothy’s home.

Dorothy oversees work on their farm which is 30 km away from their house, travelling there periodically by foot or bike. She also earns some money by tailoring, working up until midnight using her solar light. Dorothy’s husband, Mr Jikubi, used to be a teacher. Now he’s retired and he helps with running the house and the farm. He also overseas the small grinding mill they have which allows them to grind maize into flour.

For Dorothy, riding on the back of trucks, camping out and simply standing to deliver a talk is physically hard work. She also finds it hard to be away from her family. Despite all the challenges, Dorothy carries on. She keeps on visiting villages, organising training events and encouraging her fellow country men and women to start Life! Groups. We asked her, “Why?”

She said, “What helps me is just to rely on the word of God, even when things are hard, I pray. If it is hard to organise in an area, we see God gives us favour and things begin to happen. We see peoples lives begin to change and people are saved. My friends have become more than friends – they have become brothers and sisters in Christ. People are coming to us for prayer. I love to give, I have always be someone who enjoys giving what I can to others. But since I’ve been with Dignity, I see the faith of my family growing and the giving is growing. My family members are now involved and they are choosing to give more. Dignity is a group of people, everyone can be involved. We go to preach the gospel just like Jesus did with his disciples”

We first met Dorothy in 2010 and have come to know her well. She’s now a member of the Mwinilunga Impact Team.

As soon as we met Dorothy we could see that she understood Dignity’s message. We encourage those we meet to start Life! Groups in their villages, groups where people can study the Bible and explore Christianity together, growing in faith and friendship. Dorothy was very keen to learn more about Christ and to bring people together in her area.

Things did not get off to a great start when Dorothy tried to set up some Life! Groups. People in her community and even some of her family were suspicious of what Dorothy was trying to do and openly opposed her.

Despite this, Dorothy really believed that God was calling her to be involved in the work of Dignity in her area. She prayed for God to show her a way forward and she started to meet regularly with a small group of friends. Together they began following the discipleship materials we had left with Dorothy and it became a simple and small scale Life! Group. They were growing in knowledge, understanding and faith.

Sadly the opposition carried on, but so did Dorothy. She could see that her life was being transformed; she wanted to be God’s person in her community. She wanted to help others to be the same.

A turning point came when the Central Impact Team came to visit and help run a “Living the Light” village training course. It started out as a difficult training session but God intervened mightily. God gave a large number of people visions and dreams about what he was doing in their area. Following this much of the opposition with the community and her own family stopped.

In late 2013, Dorothy with 2 friends, John and Edina agreed to become an Impact Team. Now they work together to support those running other groups, train new areas and to bring Christ and his kingdom to the remote villages.