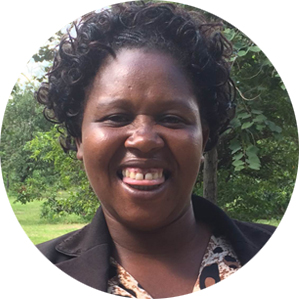 As a young girl, Esther was taken out of school by her parents who saw no use in educating her. Nobody had great hopes for her. Today, Esther is a wife, a mother of six, a home maker, a woman of prayer and an encourager.

We first met Esther in 2009 when she came to a training session we were hosting in Mikunku. Esther had been praying that God would connect her to some work she could do to help others know him. She left the training session encouraged and began to gather people in her community.

At first it was difficult. Esther recalls that people discouraged her and told her the work she was getting involved with was not good. However, Esther was sure that meeting Dignity was an answer to prayer and did not give up.

Today, things have changed. Esther says, “Yes I used to go to church but I never used to understand properly. The teachings we are learning are helping me and opening up my spiritual understanding…We teach others to come together and start encouraging one another and by so doing we tell them they will see the goodness of God. This is what we have seen.”

Esther’s husband Christopher leads their local church. She has been sharing what she has been learning with him and sees a change in him as well. Instead of feeling pressured to force people to be “good” people, he has begun to trust that God will help people to change their lives. The whole church is benefitting and the community is seeing the difference in the church.

Although people in her life may not have seen potential in Esther, God did! Through her love for God, Esther is proving instrumental in bringing change and hope to her community. In 2014 Esther started shadowing the Central Impact Team. At the start of 2015 she committed to being a team member and is now an integral part of the Central East Impact Team. She is helping others do what she has already done in her own community.