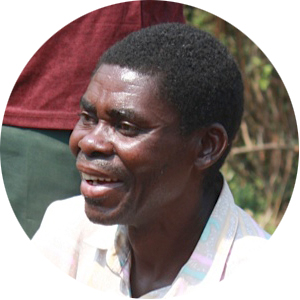 Gervas is married to Margaret and together they have 8 children. Gervas splits his time between Chimbombo where his family lives and Lusemfwa where they have a farm. As well as being a farmer, Gervas is also a carpenter and spends any spare time he has making furniture that he can sell.

Listening to Gervas speak you can hear his genuine care and love for his fellow countrymen and women. He says he is involved with the work of Dignity because it really helps people to love God with all their heart and to love their neighbour. He sees the biggest challenge facing Zambians as being how to help so many of their “neighbours” out of poverty. He believes that the work he is a part of with Dignity is a real and meaningful way of making a difference to the people he lives alongside.

A very practical man, Gervas has got involved with the Life! Skills conservation farming training, being delivered in partnership with Foundations Zambia. He has already been encouraged by what he has been learning and is now passing on his new knowledge to others he supports in his Impact Team role.

Gervas first came across Dignity in 2011 when he and Margaret attended on our training events in their area. He and Margaret have both committed to being Impact Team members serving the Central Province of Zambia. Gervas finds it encouraging to be able to pray and work with the poor in his communities. He says, “It gives me hope and it gives them hope”.

Gervas is seeing the fruit of his labour in communities where he has been supporting Life! Groups. He says that through coming to know Jesus better people have begun to love their neighbours more. This has lead to people visiting the lonely, encouraging those who are struggling and even farming small plots together. He says that through these practical actions others are coming back to Jesus or meeting him for the first time. He has seen people who were addicted to alcohol break free from their addiction and their whole family benefit practically, emotionally and spiritually. No wonder that Gervas says he loves doing the work of God!

You can hear Gervas speaking about his involvement with Dignity in this interview recorded in July 2014.