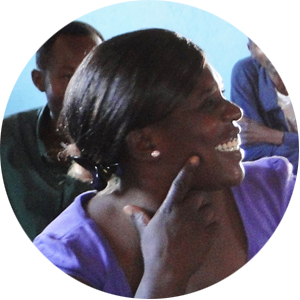 Margaret is a strong woman with a big smile and an even bigger laugh! She is married to Gervas and together they have 3 girls and 5 boys.

Margaret is an active community member running her own tailoring shop and being integral to the running of a home-based care organisation looking after vulnerable children in her area. She also runs her house and has been involved with Dignity since 2010. When she gets the chance, she loves to relax and watch a film!

As you can tell, Margaret is a lady who can make things happen. When she first attended a Dignity meeting she left inspired to do something in her community. We had asked people to gather a group of 10 people from villages around them and to start praying for their area. We promised that if they got a group of people praying together we would come and run some training in their area. Well, Margaret took us up on that and before long we were visiting her in Chibombo to tell people about Life! Groups and how to get them started in your community.

Margaret got some friends involved and began a Life! Group herself and helped others start some groups as well. We saw the natural potential Margaret had and invited her to become an Impact Team member. We have been working with her since and helping her grow so she can help many others.

For Margaret, one of greatest encouragements is being able to help those who are struggling. She loves visiting Life! Groups that have been meeting for some time to follow up with them, an integral part of the work of Impact Teams. As she gets to know people and understand their situations she is able to help them overcome the challenges they face and achieve more than they thought they could.

Margaret says that working with Dignity has been good for her as it has taught her lots about Jesus and herself! She explains it as having learnt “how to handle myself” and says she is still learning. Aware that she is constantly learning helps her teach others in a compassionate way.

For Margaret, the hardest aspect of the work she does with Dignity is sleeping in a tent when visiting villages. However, she says it is worth it as she can see people and villages changing for the better as they come to know Jesus more deeply.

Having only had the opportunity to go to school until Grade 9 (part way through secondary school), Margaret is currently fitting in evening classes in English, maths, geopgraphy, history and civics!